The International – you can find anything on the interweb

I was just looking a website for an unsigned bands competition (Festibull), which got me thinking about bands I’ve been in. The longest running and most interesting was ‘The International’ â€” we didn’t gig much, but we were completely out-of-time modish art-rock. We used to have a practise room next to Mistress (very metal) and Coaster who became Dexter who became Walk.DontWalk (who were a totally different band – one member remains – then, very OCS).

We self-released a ‘single’ (EP, more a demo really) â€” so I thought I’d pop an mp3 onto the band competition thing to see what the process was. I have a copy upstairs, but I couldn’t be bothered to go and find it then rip to mp3. Maybe, maybe it’s already up on the interweb somewhere. So judicious searching later I found an abandonned geosites page belonging to one of our guitarists (who I haven’t seen for five years at least).

We did have a website (back in 1998 this was a odd thing), it’s long gone – or at least the WayBack Machine can only find a bit of it. (“Van Gough, Stan Collymore, The International, add us to the list. The explosion will be visible from space.”). I’ve now been motivated to scan the cover of the EP – although I can’t find a colour version of the cover (locked up in my box of old crap in the loft I think): 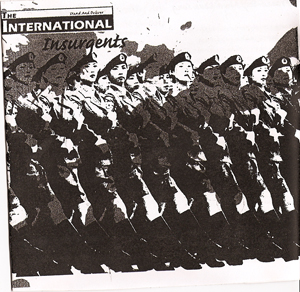 And of course, for posterity if nothing else, the mp3sâ€¦ (I’m singing and playing bass â€” badly of course):

The International – Joan of Arc (was in the Go Gos)

The International – Freeze-Dry Me A Love Song

The International – The Hard-On Song