After Through the Wall, and a dodgy (by which I mean rubbish) text adventure called Planet of Death (of which no record exists), one of the first games I played on my ZX Spectrum was Football Manager. It was slow, written in BASIC, and the amount of control you had over the success or otherwise of your team was minimal. You could pick the best team you had, but there were no formations or tactics or anything complex like that.

Despite all that, Football Manager was a great game â€” the highlights left you in a nervous clinch with the speccy. If you looked away, would your goalie boot the ball to safety (no graphic characters left for diving or any animation like that)?

To celebrate the coming of the new football season, I present famous footballing scenes â€” as depicted through the eyes of Football Manger on the 48k Spectrum. God bless Kevin Toms.

That’s this goal, the greatest off all time? Hmmâ€¦
You can see a little pixel Peter Reid trailing in his wake. 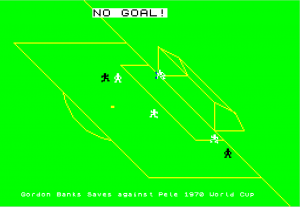 Gordon Banks's Save from Pele, Mexico 1970

That’s this save. The greatest of all time, I think.

And to finish, the second most famous goal of all time: 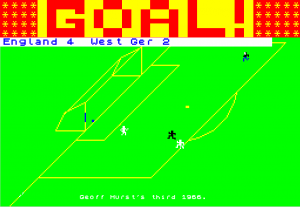 Want to play Football Manager now? You can via the gift of java emulation.