This post was written way back in Twitter’s first flush of youth, Feb 2009, but I’ve updated it to reflect some technical changes and other stuff as of April 2010. 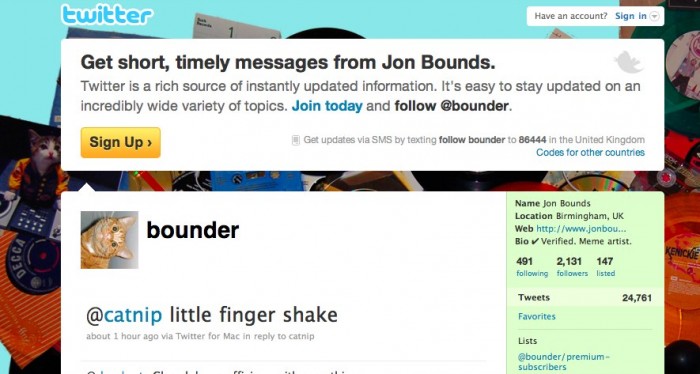 Been hearing all the hype about Twitter, but don’t know how to have a go? Here’s a quick guide to starting off, helping you to avoid getting lost and frustrated. I’m not going to tell you why Twitter is great, or how brilliant it is at finding news first or how “following” celebrities will change your life — Twitter is different things to different people and you won’t find out how it works for you until you try it for a bit. For now, let’s assume you’re interested in it but aren’t really sure what to do. 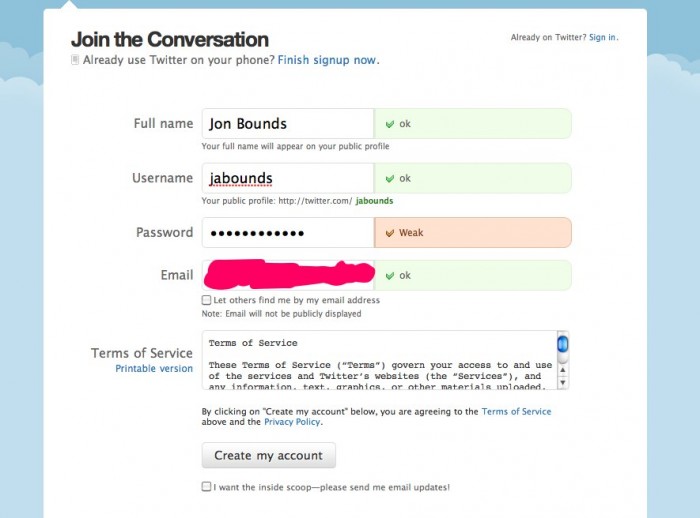 To set up an account you’ll need an email address, and that’s it. Twitter will send out an email to say you’ve signed up and ask you to confirm, but unless you ask it to you need never get another email from it again.

Then fill in the form, let’s quickly whizz down it:

Full Name: Although you can be anonymous or use a pseudonym, most people on Twitter use their real name — it’s all about conversation and people like to know who they’re talking to.

Username: This is the important one, because real names aren’t unique and everyone’s Twitter names need to be different. You can chose almost anything you like here, as long as someone else doesn’t already have it. But — think about it. This is your main identity on Twitter, and if you really get into it you’ll have to say it out loud.

Password: As ever, pick one that’s hard to guess, but easy to remember.

Email: You won’t need this much, but you can set up notifications from Twitter of new followers and direct messages — make sure it’s right (although you can change it later). If you have more than one email address pick the one that’s closest related to what you’ll use the account for, as people can search for your Twitter account using the email address (if you’d rather this didn’t happen you can untick the box that says ‘Let others find me by my email address’). 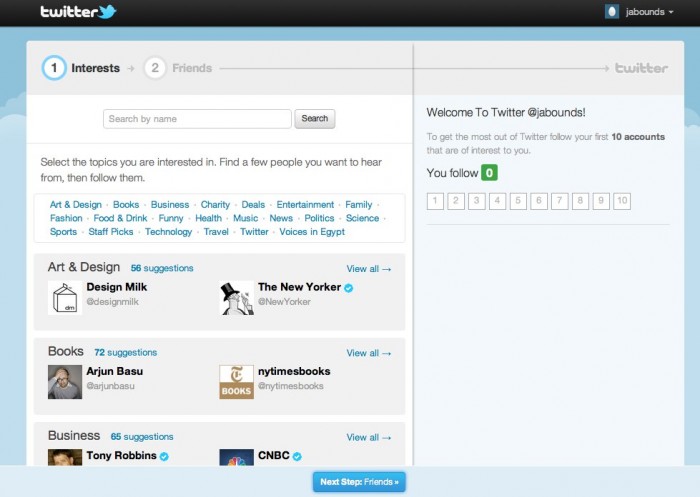 Next you get a list of “recommended” people to follow, this isn’t based in any way on how you’ll use Twitter, or who you know — I’d say skip this step at this point. You can come back to it later.

Twitter then asks if you’d like to use your email address to see who of your contacts is already on there. I’d recommend you skip this step (centre bottom of screen)  for the time being, as you haven’t sorted out your profile. You can always come back to this later. 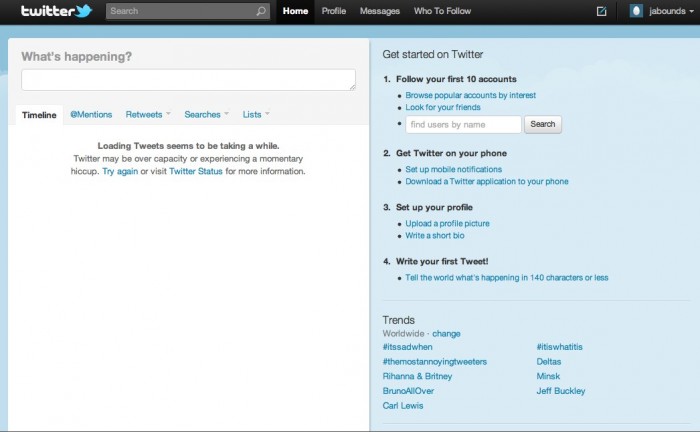 You’ve got a twitter account, and Twitter offers some friendly advice on what to do now on the right hand side—they want you to get started really quickly. But it’s important to set up your profile first so people know who’s tweeting. You’ve got your name, and username — but there are a few more things to add.

Most important is a picture — people use them as a quick reference of who is tweeting, so to leave the default egg logo up is a little like hiding behind a mask. 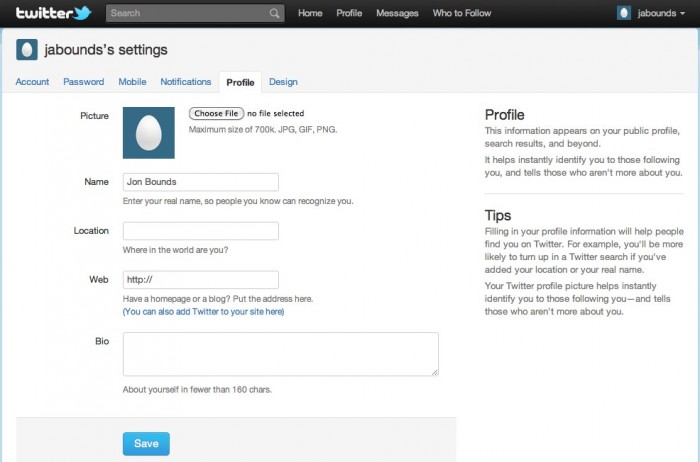 Click on Settings (on a drop-down menu from your username, top right) then Profile in the tabs in the centre.  You can then chose a picture from your computer to use:

You can change your name, and username (and email) here if you want, but the bits you’ll want to start with are:

More Info URL: If you’ve got a blog or a website, or even a mySpace or Facebook page that you want people to know about then put the address in here — if not it doesn’t matter.

One Line Bio: This is where you get to tell people about who you are — it’s the bit people will read when you follow them (don’t worry we’ll get to that) and will use it to help decide if they’re going to follow you back. That said don’t feel under pressure to make it hugely witty, or worse feel you need to boast. If you’ve decided to join Twitter because it might help you with work, or another interest, then mention that. Otherwise just say the sort of thing you might say when introduced to someone at a party (which is a good analogy for how relationships on Twitter can work).

Location: No need to be very specific, but lots of Twitter services use where you are as part of the information. You might find too that you’ll end up talking more to people in the same geographical area as you, as you have that in common at least. Just a city/town and a country (“Birmingham, UK” is what I use) is enough.

Simple answer, anything you like. Anything at all. It really doesn’t matter, you’ll soon find what you want to say. There’s no shame in your first tweet being something simple like “hi, I’m new here” — it’s not earth shattering, but it’s best to have something up there. Don’t feel you have to answer “What’s happening?” You can ask questions, make statements, say what you’re thinking — anything.

Again, anyone you like. It’s most likely that someone you know has told you all about Twitter — they’re a good place to start. If you know their username you can hop straight to their profile page by going to twitter.com/username (replacing username with the actual username of course).

If you’re not following someone their profile page will look something like this: 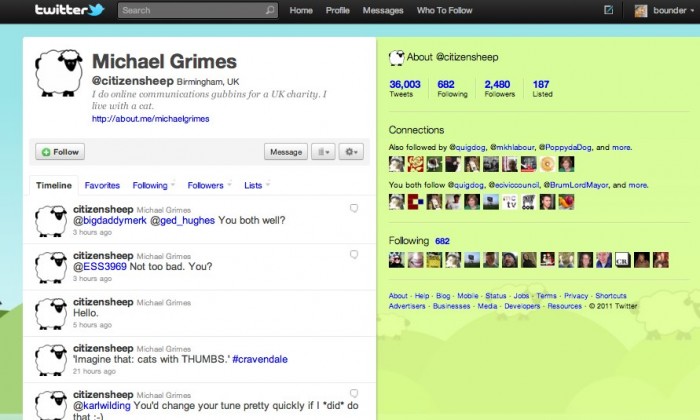 Now’s a good time to use the contact book tool to see if anyone you email is on Twitter already. Who To Follow is in the menu at the top. You’ll need to have an account with a webmail service like Hotmail or Gmail. If not you can use a search tool to look for people you know by real name.

But the best way of finding people to follow is looking at the lists of people your friends are following (you’ll most likely have similar interests), you can do that by clicking on following on someone’s profile page. You’ll then be taken to a page that shows usernames, names and pictures of Twitterers only a click away.

Don’t expect people to follow you back, or feel obliged to follow people who follow you. There are loads of ways to see what people are up to on Twitter, directly following people is just one way.

By default you’ll get an email when someone follows you, clicking on the link in the mail will take you to their profile. You can turn this off in the Notices section of the Settings if you wish.

Now you’ve got people to talk to you’ll start to want to have conversations with them. Twitter is really simple in how it deals with messages, but as well as simple tweets there are replies and direct messages.

If the @username is the first thing in the tweet then the message is called a mention (or often by people an @reply, “at reply”) — and it’s treated in a bit of a special way by Twitter. As well as seeing those from people you’re following on the home page (in the “stream”) there’s a ‘Mention’ tab on the page where they’re kept separate — so you can quickly look back to see if anyone has said anything directly to you.

If you’re not following someone who mentions your username it will only appear in the mentions tab.

A tweet starting with an @username by default is only seen by those following both the sender and the owner of @username.

There’s a ‘reply’ button next to each tweet so you can quickly start your reply to anything.

Direct messages are different to any other tweet in that they don’t go in the public timeline or on any user’s home page. They are sent directly to the Twitter user and only appear in their “Direct Messages” section (it’s by the Mentions tab on the home page. By default you also get an email of any direct messages sent to you — you can switch this off in the Notices section of the Settings if you wish.

To send a direct message use “d username” at the start of your message. Make sure it’s just “d” and leave a space — any other message will be public.

You can only direct message people who are following you, this is to prevent spam.

You’re now set up with all of the basics of Twitter, and you’ll probably understand enough about it to ask questions (on Twitter — it’s great for that!) and use the Help section to find out about some of the more intricate details. But here are a few bits of advice from a long time user, that you may find useful:

Twitter doesn’t make much sense until you follow a good few people — about 50 by my guess — spend a few days or weeks exploring and finding people to follow.

The Twitter website is a very basic way to follow what’s going on, it works but it’s slow and a bit clumsy. Much better are many of the free applications you can download, for pretty much any computer or mobile phone. Twitter has a page showing their offficial ones but search for “Twitter client” on Google and loads will come up. Personally I like Twhirl (which works on Mac or PC), but  and use the offical Twitter apps on mac, iPhone and IPad

Don’t worry about “missing” stuff, Twitter is a very “now” thing. No one will expect you to have read everything, if you’re not there when it happens just let it go — if it was important people will mention it again.

Don’t think of your most recent tweet as a “status”. Unlike Facebook, people will know when you tweeted what you tweeted. Just because it’s the most recent thing you’ve said it doesn’t have to be the most important  — and you don’t need to say the same thing over and over again to keep it on top.

You do only have 140 characters and each tweet exists in isolation, so if you split a thought over more than one it might not be obvious what you mean.

Have fun! It’s not compulsory, but if you give it a chance I think there’s something in it for everyone.

There’s loads more to Twitter, tons of applications and ways to use it — if this is a useful format for a guide I’ll try and do a stage two. In the meantime, if there are any questions, feel free to ask them in the comments and I’ll try to help (or sign up an Twitter and ask, there’s lots of people willing to give advice).

This is licensed as Creative Commons Attribution, you may do anything you like as long as you credit me.

a beginners' guide to twitterguidetipstwittertwitter apps