The Moran Scale of Twitterstorms

I was asked to ‘create’ a Twitterstorm as part of an art project, and I sort of did. While this wonderful Buzzfeed post describes the stages that one goes through, in order to measure the size of a storm and hence the success of my operation we needed a way to describe the extent of a particular one. With Jon Hickman (Degree Leader, Web and New Media at Birmingham City University) I worked up this scale.

It’s an attempt to give a quantitative scale to something that cannot be measured directly in numbersâ€”this is about extent and influence and simple measures are never going to cut it, although as the number of Morans increases so does the number of Tweets and their anger. It’s based roughly on the idea of the news cycle and how the subject of the storm operates within it. We chose the name ‘The Moran Scale’ after Caitlin Moran, whose ability to kick off the stormsâ€”and get them featured in the old school mediaâ€”is unrivalled. As it’s about intensity of storm, a parallel to the Beaufort Scale is entirely intentional. 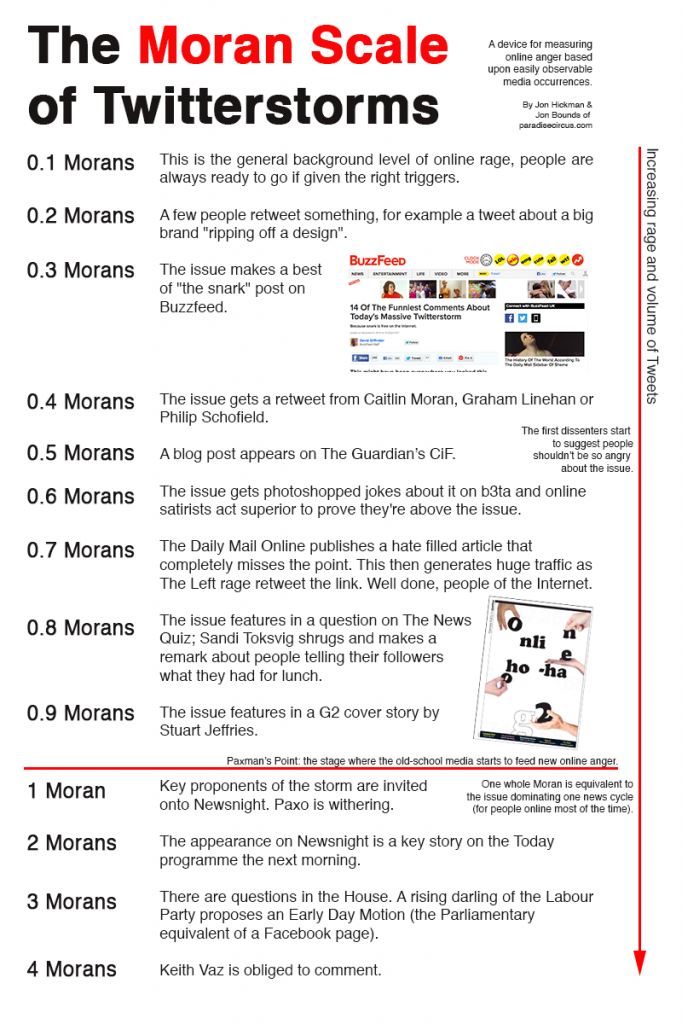 0.1 MoransÂ This is the general background level of online rage, people are always ready to go if given the right triggers.

0.2 MoransÂ  A few people retweet something, for example a tweet about a big brand “ripping off a design”.

0.3 Morans The issue makes a best of “the snark” post on Buzzfeed.

0.4 MoransÂ The issue gets a retweet from Caitlin Moran, Graham Linehan or Philip Schofield.

0.6 MoransÂ The issue gets photoshopped jokes about it on b3ta and online satirists act superior to prove they’re above the issue.

The Daily Mail Online publishes a hate filled article that completely misses the point. This then generates huge traffic as The Left rage retweet the link. Well done, people of the Internet.

0.8 MoransÂ The issue features in a question on The News Quiz; Sandi Toksvig shrugs and makes a remark about people telling their followers what they had for lunch.

0.9 MoransÂ The issue features in a G2 cover story by Stuart Jeffries.

1.0 MoranÂ Key proponents of the storm are invited onto Newsnight. Paxo is withering.

2.0 MoransÂ The appearance on Newsnight is a key story on the Today programme the next morning.

3.0 MoransÂ There are Questions in the House. A rising darling of the Labour Party proposes an Early Day Motion (the Parliamentary equivalent of a Facebook page).

Extensions, annotations and versions for other countries are very welcome.