If there was one central point to remember to make online consultation successful it would be that if the question isn’t a good one the best response you’ll get is none. If the object of the exercise has no real meaning or effect then, while no response would be disappointing, it only takes a tiny meme to make silence seem like a success.

Take the administration in Austin, Texas (home, it must be said to large number of Internet culture savvy people) who probably thought that it was a nice piece of harmless PR through engagement to ask the people to come up with a new identity for the city’s waste dept. No-one sensible could care too much about the outcome, so it becomes open for hijack, open for people to have fun with, and easy fun is a great driver of activity. Activity you may have seen on the web this week: 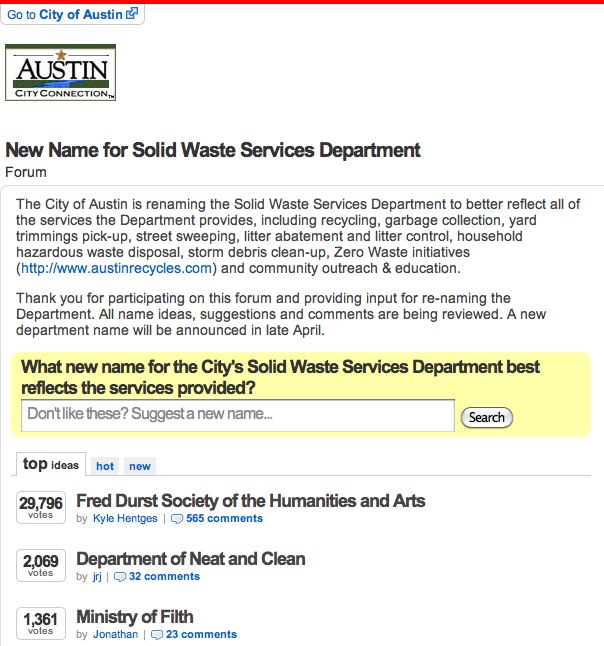 And so the idea of the ‘Fred Durst Society of the Humanities and Arts‘ was born and attracted much attention, narrowly beating the ‘Ministry of Filth’ (although my personal favourite was ‘The Austin Dept. of Are You Going To Eat That?’).

It’s not going to happen, of course, so the outcome is that the consulters look stupid—drawing attention to both the time wasted of rebranding and their helplessness against the weak ties and satire of the web. What’s worse is it shows problems in engament in that  numbers of votes for this poll in total dwarf  those in other, more well thought through, consultations.

Even worse is when there’s a memetic idea that is simultaneously eligible, fun, and unacceptable to the consulters. That’s what’s has just taken hold in Fort Wayne (who like Austin are using the feedback tool Uservoice—blameless in these instances and a fairly nice solution to the tech aspects of this sort of questioning).  What bad luck for the town to have had a mayor and statesman with a vaguely rude sounding name (the man himself pronounced Baals “balls”): 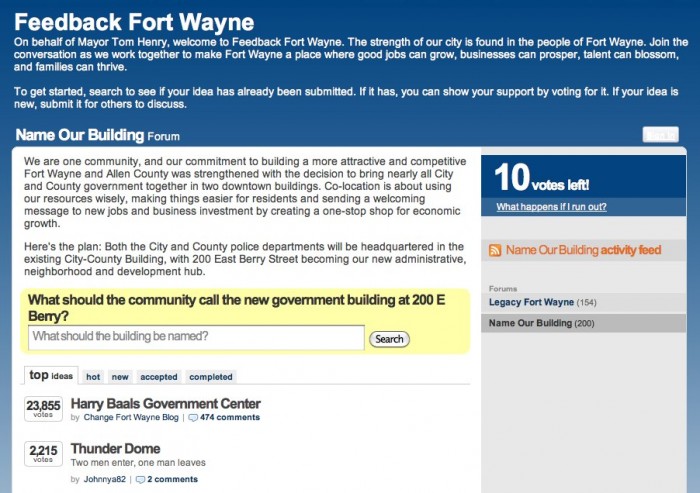 As you can see the comments here are getting heated, there are legitimate reasons for honouring the man and there’s just no way to come out of this well now. Not every question is a good one.