BiNS â€” where too much of my time goes 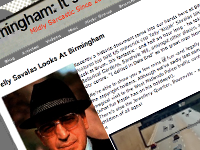 Birmingham: Itâ€™s Not Shit has been serving up the not-so-ugly truth about Britainâ€™s second city since the time of its failed European Capital of Culture bid in 2003. It continues to attract visitors and publicity, and has become one of the foremost online presences in the area – offering news and comment to as wide an audience as it can. It maintains a community element with groups on Flickr, commenting on the blog, and a long-running forum. The latest version is built on WordPress and BBPress.