Is it for charity?

I once persuaded Â quite of lot of people to spend 11 hours on a bus: a trip that would leave them pretty much where they started after three or four times round a loop. â€œIs it for charity?â€, people would ask.

It was based on Birminghamâ€™s Outer Circle route: a 26 mile circuit around the outer suburbs that does a complete run in around two and a half hours. Itâ€™s the number 11: hence 11 hours, on the 11th of November (the 11th month).

I wasnâ€™t hiring a bus, nor organising people to meet, anyone interested in joining in was just to get on the normal bus wherever they liked and go: the concept to get them to think about the city and respond in a hopefully interesting way. It worked, lots of people did it, but it seemed to be a hard concept for some to grasp: not the oddness, not the connection to the place or the date, but the motivation.

Quite often itâ€™s better to travel hopefully than to arrive, and that was certainly true in this case â€” I got off at the same stop as Iâ€™d got on 11 hours earlier. I was comfortable with that but other people seemed not to be. â€œItâ€™s art,â€ didnâ€™t exactly make the correct change drop with most: but it certainly stopped the conversations dead. People donâ€™t question art, probably not because they respect its power, more likely they just donâ€™t care.

The full â€˜better to travel hopefullyâ€™ quote is from Robert Louis Stevenson (from Virginibus Puerisque) and in full it is â€œfor to travel hopefully is a better thing than to arrive, and the true success is to labourâ€. I think that means that we should enjoy things we do for their own sake: and thatâ€™s where Pier Review came from, essentially we thought it would be a good thing to do. We could have asked people to sponsor us, we could have added conditions that made it tougher, but essentially we wanted to visit lots of interesting places and write a book about it.

But we very clear what we were not doing. What we were definitely not doing was â€˜taking on a drunken bet’: I donâ€™t think anyone ever believed that once weâ€™d got round to setting off we wouldnâ€™t do it. There was enough jeopardy in spending two weeks and two thousand miles in a car with two other men, not to mention the sheer challenge of Danny and I writing 80,000 coherent words about the experience.

There’s a Mitchell and Webb sketch that mocks the sort of books that are about an odd quest, framed as a bet. â€œI just canâ€™t stop taking on these weird wagers.â€

It wasn’t a bet. It wasn’t for charity. We wanted to do it, and we wanted to write a book about it. It was tough: tough to find the time, tough to keep thinking that we could do it (especially when Danâ€™s first draft beat mine to the finish line by months), and tough on everyone who had to listen to us going on about it when the evidence was not yet in front of their eyes. I never wanted to be someone who kept talking about writing a book without doing it.

None of those little deaths happened while in a tent going around the coast.

And it reaffirmed that you should do the things you want to do, even if the reason isnâ€™t easy to explain.

Someone else will always do the same stuff eventually. For those other, easier-to-explain reasons: chivvying people on and off their bus see the sights, for a price, with profits going to charity. And someone since us has travelled to all of England and Walesâ€™ seaside piers, for charity

But youâ€™ll enjoy it more if you care about it. 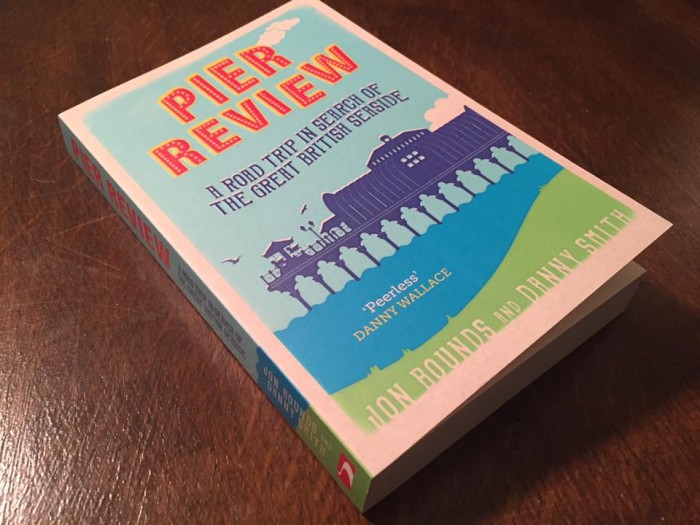