C&binet on the future of local news

I spent a fascinating couple of days down in that London at an gathering of those interested in the future of local news — organised by Sion Simon (Minister for Creative Industries) at the Department for Culture, Media & Sport, who are hoping to have got some useful ideas for future legislation (the Digital Economy Bill)  It was brilliant to have a range of people from different backgrounds and interest groups to talk to and learn from — too many events are focused around one industry or interest group and end up being (to be clichéd) an echo chamber — with it being particularly good to hear about how things are shaping up in the States. Hannah over at Podnosh gives a good overview of the whats and the whos.

But first the “bad news”, see the decline in regional newspaper circulation from 1993 (as shown in a very impressive set of slides from Douglas McCabe of Enders Analysis)

What strikes me is that, while the decline starts to happen consistently with widespread internet adoption, there are huge drops in years before that, including 1993; before the world wide web. Something was up with what the regional press was offering long before people started getting news online —  and local news online provision lagged behind that of national (certainly in Birmingham where it’s only been about a year since the local papers started to publish properly on the web).

I have a little suspicion that it’s the era of spin that may have turned people off — but that’s just conjecture — what’s more obvious (and was generally agreed on in discussions) is that it’s not just the news provision that people find online. The community building, organising, communication, advertising (classifieds) have all moved online to better platforms — ones that newspapers don’t own.

That perhaps explains the difference in time spent reading a newspaper as opposed to looking at news online:

Although I’m not sure how the “30 minutes” is calculated — it seems a little too much like asking people and them replying with “ooh about half an hour”. The problem with measuring offline activity against online is that the online can be measured hugely accurately, offline not quite so much.

It does paint a picture that suggests that advertising won’t in any way support news online in the way it has in newspapers, which I think we all knew — but the figures present a very depressing picture for local press in particular.

So, what would we lose if we lost the regional press? One oft mentioned example is the loss of a regional “fourth estate” — to hold councils et al to account, another a loss of investigative journalism. Just how much council coverage, and how much investigative work is done is open to debate (and there are even a few attempt to measure it).

There’s no doubt that these things can be done online, whether by what we’d now understand as journalists, by other people working alone or by groups collaborating (maybe on sites such as Help Me Investigate —disclosure, I’ve worked wtih HMI). There’s also no doubt that that can be made easier by Government (Local & National) transparency and access to data. Streaming (and archiving online) council meetings would be a huge boon to the local blogger. Imagine this including your local government.

I think it’s re-enforce my thoughts that the hole left my newspapers probably wouldn’t be newspaper shaped, or needing to be filled by just one thing. People have been plugging gaps already, and (most of) the papers are still here.

This is some of the really interesting stuff,  I learnt a huge amount about the different types of companies that are attempting to make the local (or hyperlocal — a word I’m not convinced about) space pay. The US is way ahead of the UK on the development of these sites, it seems. They differ in method, but all really do one thing — get local people to tell the news, and sell advertising around it. Some edit, some profit share, some build discussion — but all use templates to build sites that talk about a specific area.

For me the issue here is that community size is too fluid, and that geographical area is a poor indication of the “right” size  of area to cover. It’s something that the templated/networked sites can really struggle with — most seem to default on city or town (20-50,000 people were figures quoted, I’m not sure this qualifies as local or hyperlocal) possibly because that’s the size at which advertising becomes viable. While there’s no reason that a site about Birmingham (such as mine) and a site about Digbeth (a neighbourhood within it) can’t co-exist — but it would be difficult to see how they can chase the same ad revenue (possibly Digbeth is even too small to generate enough views, I’m not sure). Only the community knows how they see a place, what feels local to them.

To a certain extent that isn’t a problem for self-produced sites, I don’t attempt to cover anything but hosting costs (and if the site uses something like WordPress.com, Ning or Tumblr then there need be no hosting costs at all) — and I don’t have to make money. The local blogger using a local blog network doesn’t have to get ads, but the network owners do.

I’m sure that there’s a place — and a business model for all sorts of of ways to do this. More likely we’ll see geo-search and something approaching geo-attention build custom offerings for each user pulling information from all of these types of sites together. What’s not clear is that there’s much (beyond opening up as much geo-located data, postcodes etc) that government can to to help that.

Attention to the UK’s libel laws, and more work on digital inclusion can help every UK blogger (or citizen) — not just those involved in local news — but if we need an impetus to work on it…

Paul Bradshaw has a much better grasp of the problems and possible solutions.

What should/shouldn’t Government do

At the end of the session we were asked to put post-it’s on two flip charts — one for what we’d like the Government to do, one for what they certainly shouldn’t. Like all that was said it’s public but unattributable — Will Perrin has blogged the complete list transcribed. 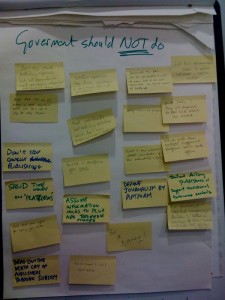