The addiction of tweaking 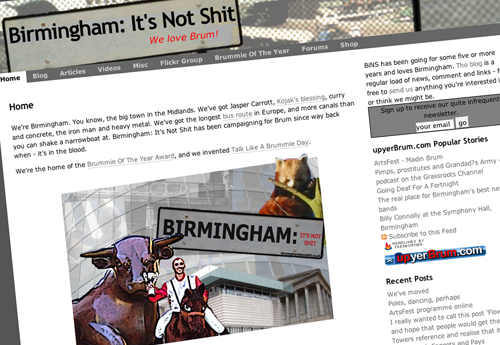 As I mentioned previously, I have been thinking of how to reduce the split between the main site and the blog of Birmingham: It’s Not Shit. I’ve long been aware that some people visited the blog exculsivley, and those that chanced upon the main page rarely clicked through to the blog – in a way this wasn’t a big problem as the two pieces have a fairly different remit, and the main site doesn’t get updated that often.

The problem was though that I started to try and bring the blog centre stage, which was difficult as the blog was blogger hosted – while the main site was on the free (and crucially bandwidth unmeetered) space that comes with my broadband account. After a few hours of messing about with blogger templates I gave up and knew what I’d long suspected – to work coherently the blog and main site needed to be hosted together, and to do that it was going to cost.

In the end I made the decision to leave the large video files on my free space, which with most of the blogs pictures being on Flickr should mean that my host doesn’t end up charging me extra every month. I chose the Web 2.0* WordPress theme, and rather painlessly imported both the blogger blog and the posts from my hand written blog which date back to 2004.

A new theme requires a new look, which requires an new masthead, which requires a new T-shirt. With inserting hundreds of redirects and permalink structure post-slug tweaking it’s taken nearly 24 hours solid work to completely move the site. No doubt there’ll be the odd missed link or lost content, but I’m not too unhappy. I can just sit back and worry about the traffic to bandwidth costs – do I want visitors or not?

One thing it has re-iterated to me though is that in the end it’s a false economy to use any free hosting of any kind for a proper project – the forum parts of BiNS are still hosted on the random free provider I picked in a rush in 2003 and there’s so much data that I can’t really get at.