Skip-Tech â€” be careful what you back

I’ve have three separate conversations about QR (Quick Response) codes, which lead me to wonder if there were at last reaching some kind of mainstream use or at least critical mass. If you’ve not come across them, they’re a two dimensional bar-code (conventional barcodes are only one dimensional, the width of the black and white stripes represent numbers â€” the length is only so that they can be seen) that is meant to allow readers to be sent straight to aÂ  web page.

QR codes were invented in Japan and have seen very heavy use there over the last ten or so years: a friend has been over and brought back some odd mushroom-chocolate sweets and even they had a code prominently on the box:

I wouldn’t have been able to use it though, as I was in a pub with no wifi or mobile reception. Even if I had that I’d still need to: know what a QR code is, have a mobile device that can use them (common in Japan, not quite so common in the UK â€” for example even iPhones don’t come with an app built in, older ones don’t have a camera hi-res enough to take the shots), be able to take a good enough photo (i.e. not see the code from too great a distance, in low light, on the move etc). Try and often as not you get something like this: 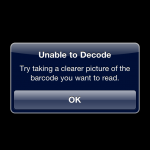 QR Codes were invented to solve a problem, the problem was that it wasn’t easy to display URLs in a usable way â€” in Japan the display of URLs was complicated by the use of western characters in web addresses (steps are being taken to even this out), but in countries using western characters the URL has to be pretty long before it isn’t quicker and easier to type the address into your browser. As someone interested in technology I was excited to see one on a pop bottle last year, took a while to find an app, and take a photo that worked â€” only to be directed to pespi.com.

The codes are even now starting to fade out in Japan â€” it’s becoming more usual now is for adverts/packaging to say “search for A COUPLE OF KEYWORDS” rather than use a QR or a URL. This has been the case in South Korea for a while, and is starting to catch on in the UK too (if you see a trailer for the new Leonardo DiCaprio film you’ll see that after tiny references toÂ  its website URL and it’s Facebook page you get a full screen caption asking you to ‘Search for Inception movie’). In my mind this is because we’re skipping QR Codes in the UK â€” not because they were bad technology but because other pressures have combined to overtake them before they have become mainstream. In this case it’s a combination of the lack of a direct problem to solve and the realisation that vast numbers of people will search even when given a URL (yes, they type the URL into Google). The ‘search us’ method is becoming even more common as it’s easier to own a search term than to buy a memorable and usable URL.

If you were trying mass communication you’d have wasted any time invested in QR Codes (luckily they’re cheap/free, educating people as to what they were might not have been) â€” they’re “skip-tech”: technology that is overtaken too quickly to gain a foothold.

The more you look, the more you can see it â€” skip-tech isn’t failed technology like Betamax or HD-DVD that had direct competition and lost out in a format war (although both HD-DVD and Blu-Ray look like becoming skip-tech to cloud or hard drive storage), it’s tech that while it does its job doesn’t fit in with the way people use technology.

MiniDiscs are the ultimate skip-tech: the first consumer digital recording format, they offered the sound quality and convenience of a CD, with the record-ability of tape. Despite working well and finding favour amongst radio people, the advent of recordable CDs (that could be played on the same systems even if recorded elsewhere) soon afterwards killed it as a format.

It’s not always so direct as a format change, but a change in behaviour. DVD recorders to use with your TV were quickly overtaken by easier-to-understand (what was all that “finalizing” about?) PVRs and online catch-up services, not to underestimate the sheer number of ‘opportunities to see’ (er, repeats) most programmes and the trend to watching whole series in box-set size gulps.

Online there’s more chance for this to happen more quickly, as with most things. The proliferation of photo sharing services backed by camera companies, processing companies and even printer firms was quickly overtaken by Facebook becoming the place to share photos. Facebook has millions more members than much better photo-specific services such as Flickr, as the sharing of photos has become something that you do within your social graph much more than with the “whole web”. The sharing of photos has become both more communal (i.e. people mostly do it in the same space) and less open (generally) than people were expecting â€” the branded photo-upload site is skip-tech.

If the technology is quick and cheap enough to be treated as disposable it needn’t matter if you back a piece of skip-tech â€” nor will it if your aims are to reach the early adopters or for a short time â€” but it’s dangerous to base longer term strategy on technology where the use or the community hasn’t started to form a little.

Be quick, be agile, look out for new things â€” but always back the social use over the flash new tech.